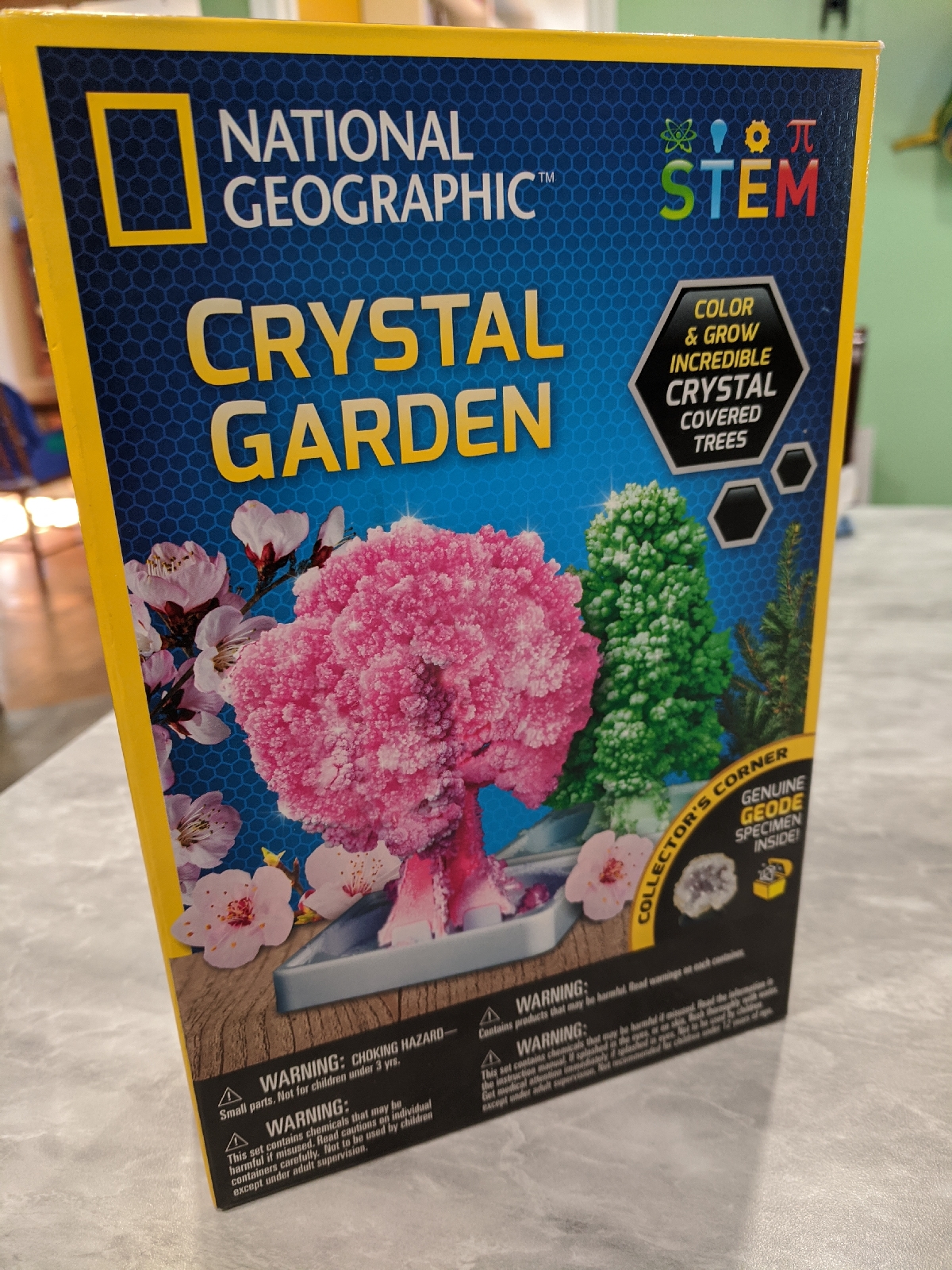 I recently got a National Geographic Crystal Garden Kit courtesy of Incredible Novelties. Even though the age recommendation is for kids 8 years old or older, we decided to try it out as a family. So dad, mom and 3 year old, we all sat together to have fun with it. 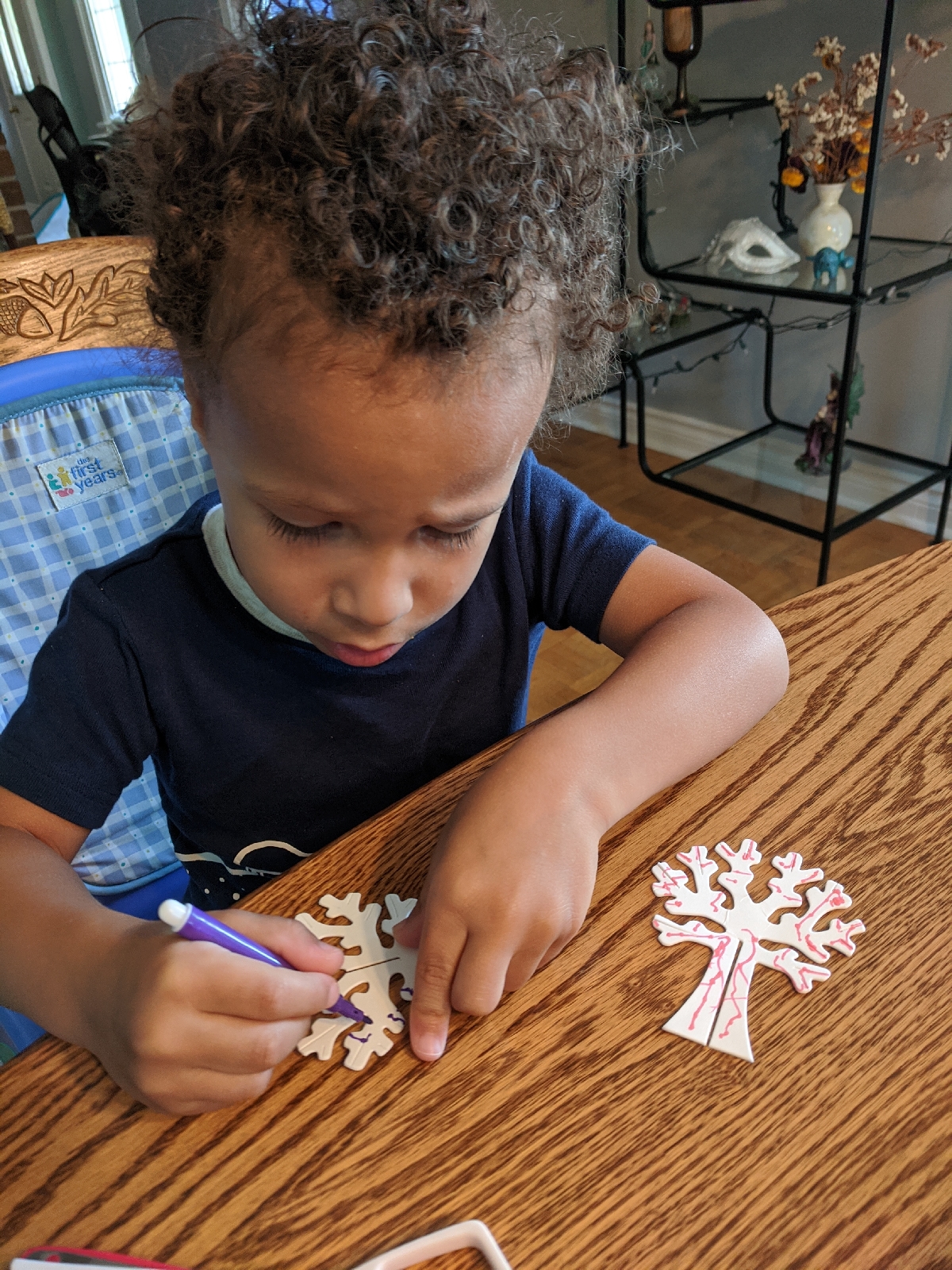 The kit comes with 2 different tree patterns, markers to paint them, the liquid to grow the crystals, 2 bases for the trees, a geode sample, a booklet regarding crystals and the instructions on how to use the kit. To use it, you need to take the trees, paint them however you want, give them some shape by folding branches, put the 2 parts of each tree together and stand them on the bases. We all took different parts of the tree and started painting. My son had a lot of fun painting everything in orange, while my husband did a very minimalist look and I went as heavy as I could on color. 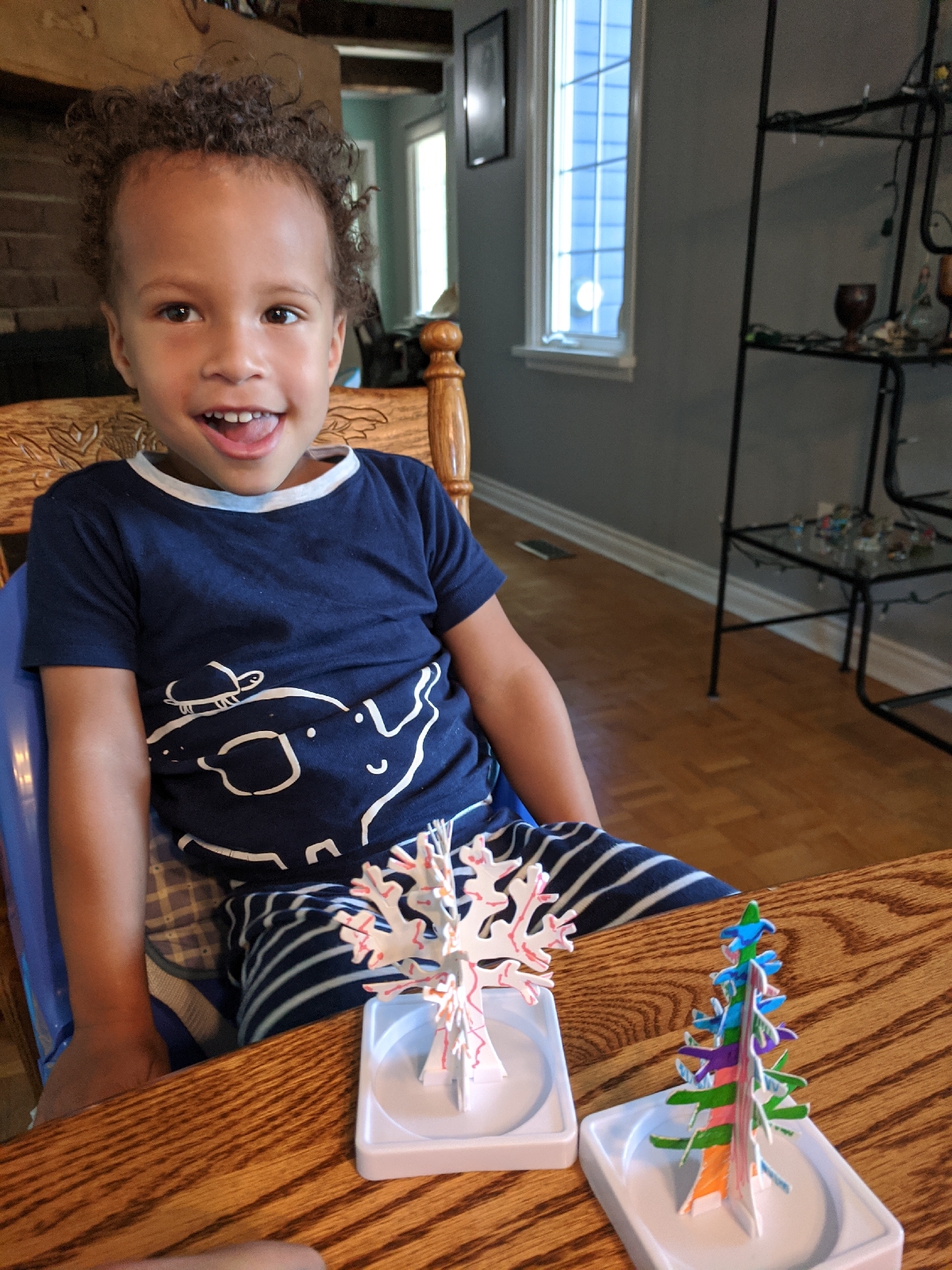 After you put it together, the instructions say to set them wherever you are going to leave them when they are growing and later. The point of this is because you cannot move the trees after or the crystals will fall, so be very careful and set them in their "final" place before using the special liquid!. We set them on a glass shelf and very carefully used the liquid. Then you have to wait. After an hour or so we started seeing some crystals growing already, and after 6 hours they were completely grown. We enjoyed doing this in the morning so we could see them change during the day :) 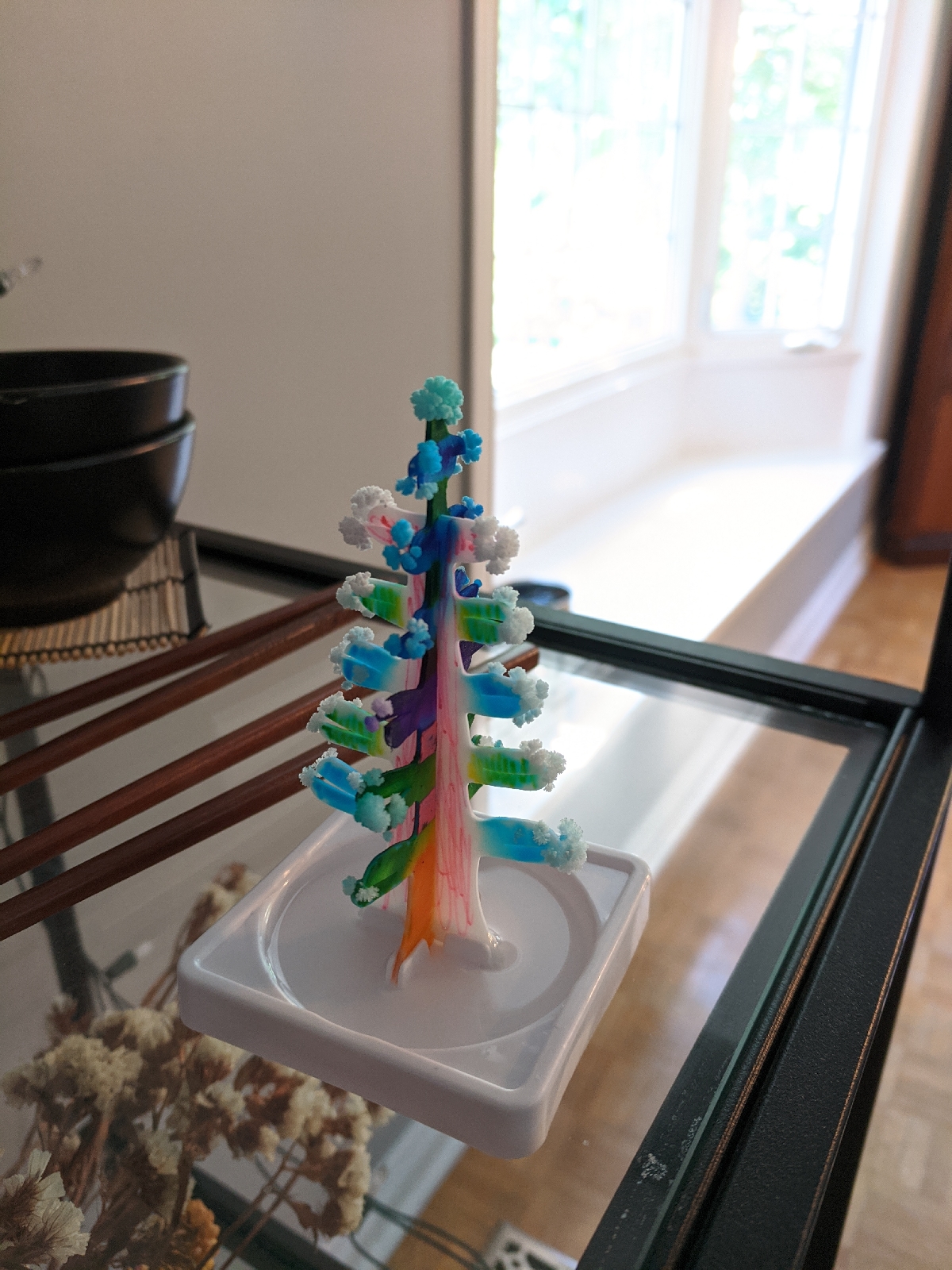 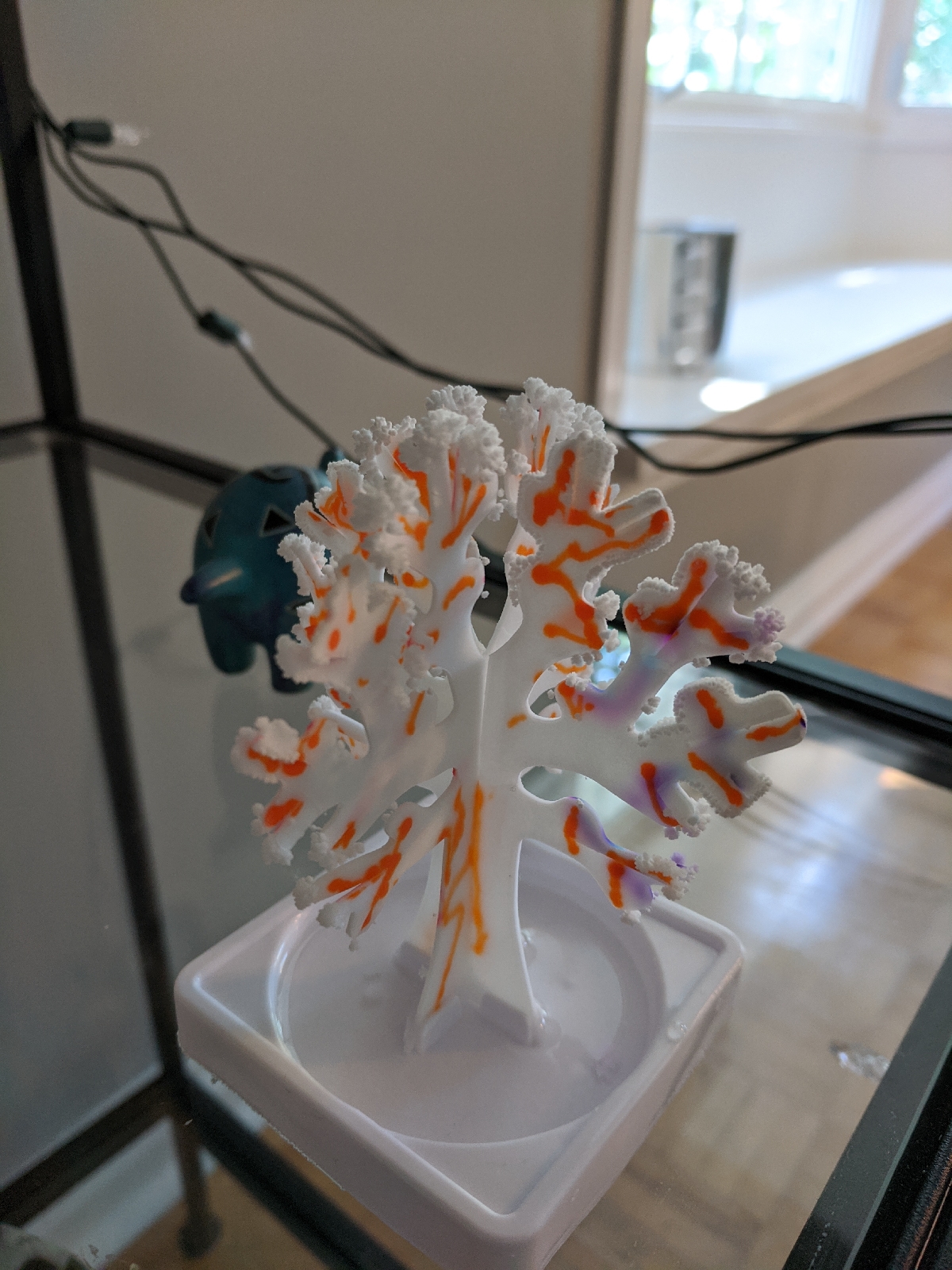 The crystals are very soft, so don't touch them unless necessary, although my son kept trying as much as he could :D After that, there is nothing much to do but admiring them. The instructions say to throw them in the trash after that but we left them there as much as we could, and after about 5 days the crystals just started falling apart. Pretty easy to clean though, so at that point we put them in the trash and we kept the geode and the booklet as a nice reminder. 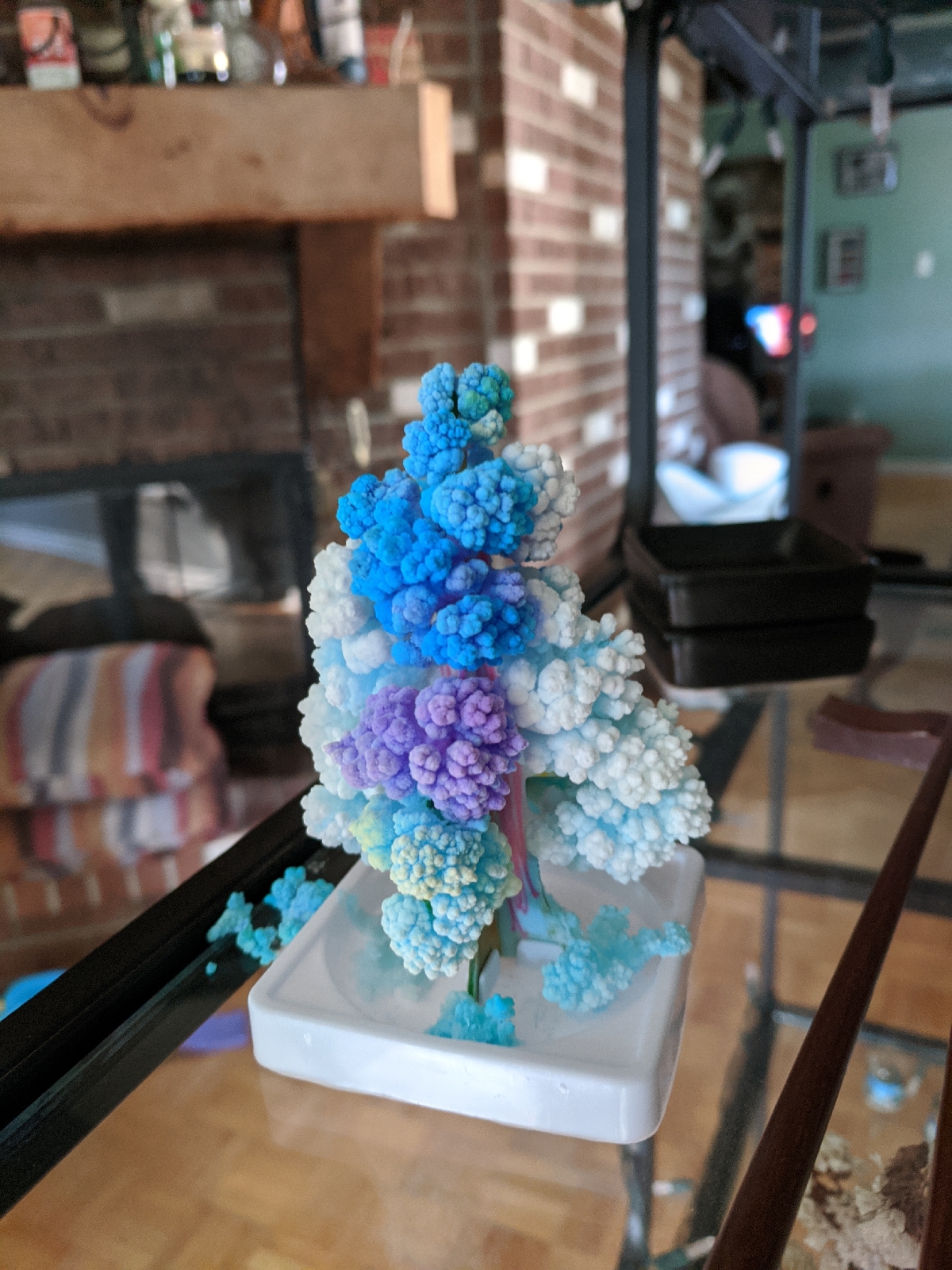 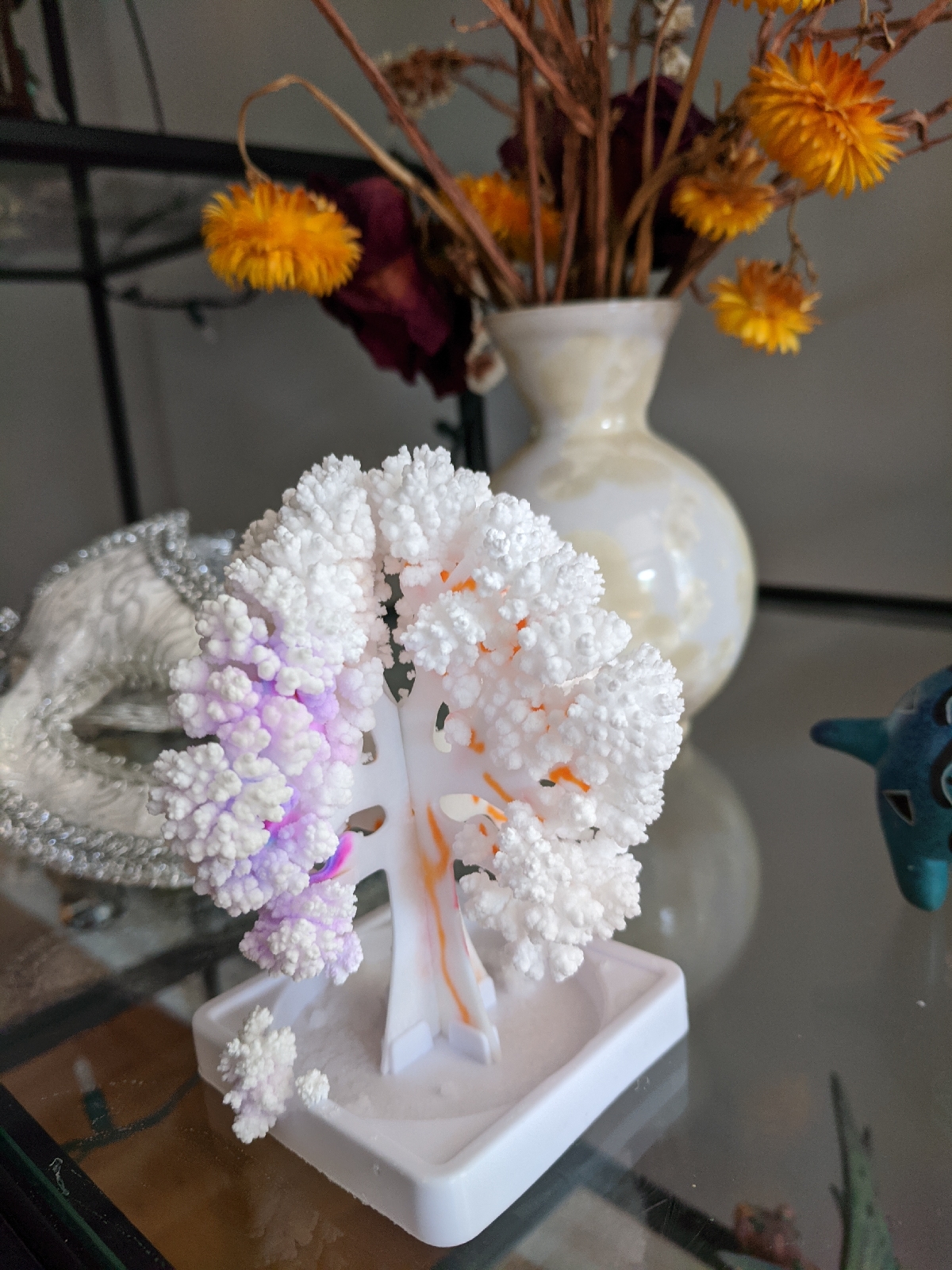 The kit is $16.99 and can be found in Mastermind, Indigo, Staples, Walmart, Toys R US, and Independent Stores. It was really fun as a family activity and I'm sure older kids would get more fun out of the scientific aspect of it! I would definitely recommend it, specially for any kids that are interested on science.

Popular posts from this blog

July 10, 2020
We have been home for 115 days. That's 115 days in which we have been trying to work from home while caring for our son. 115 days of no parks, no Early Year Center, no daycare, and no socializing with other kids, and our son is cracking.
We have tried a schedule, we have taken as much time off as we can, and we opened up our self isolation to the grandparents, aunt and uncle around day 60, but we still struggle. As long as one of us struggles, we all do, and when the smaller of us struggles we all break. Our son is sweet one minute and losing his mind the next 2 hours. Last week he spent all week refusing to look at us. I've cried every week the last few weeks and right now I want to cry every day.
Our son needs socializing, he needs routine, he needs to interact with other kids, and he needs more time than we can give him. He also needs less TV but if we do less than the 2 hours a day we currently do, then we can't work. This is hard, and we know we have it easy compared wi…
Post a Comment
Read more

June 27, 2020
Yesterday I received an email from my son's new school (he starts JK in September) and I wasn't expecting much given that Covid has cancelled everything. The email said a welcome bag had been delivered to the families of new JK students and I was incredulous, I would have seen it already if it was true, right? Turns out they were that efficient and a bag was hanging at my front door.
As I got excited and took the bag to my bedroom to inspect, the more I saw, the smaller and bigger I felt, and I started crying. I cried and I cried, because I'm still an immigrant. I have been in this country for almost 13 years but I still am and will always be an immigrant. What the bag represented was a dream come true.
When I left my country I had only one thing in mind, a better future for my future kids. What this bag represented was 13 years of hard work, 13 years of being away from my family, 13 years of leaving my friends and everything I knew behind and taking a leap of a faith to a c…
Post a Comment
Read more

June 23, 2020
Hi, my name is Aiglee, and although this is a new blog, I have blogged for the last 10 years in several different subjects. This time my sister brought up the idea of writing about my parenting style, the toys we like and the video games we play.
Why did I chose the name of the blog? Some of us have the opportunity to grow up with STEM or STEAM surrounding us and some of us don't. My husband grew up in a farm learning about growing animals and plants, how to have fun getting dirty, play with atvs, jump on lakes and all around enjoy nature and working with your hands. I grew up with a biologist dad, a mom that instilled me no limits, and the University halls as my playground. I grew up around science as my main education and technology as a goal, and our almost 4 year old boy is growing up with the best of both worlds! In a technology focused world, growing up in a STEAM household can be an amazing advantage.
In our particular case, we both chose technology as our education fields. M…
Post a Comment
Read more